t is thought that PRRS virus has a strongly restricted tropism for only those sub-populations of macrophages found in lungs, placenta and lymphoid organs that display two specific glycoproteins: Sialoadhesin and CD163. It seems that the virus cannot replicate in monocytes in circulation or resident dendritic cells in the lungs. However, recent studies point out that PRRS virus could replicate in other subtype of macrophages or dendritic cells. Initially, virus replication occurs in local permissive macrophages and then spreads to the lungs and lymphoid organs, such as the tonsils and lymph nodes, and less consistently, to other tissues. The virus can be detected in blood (viraemia) within hours (12-24h). The length of viraemia is strongly influenced by the strain and the animal’s age. Thus, viraemia may extend for several weeks in piglets, whereas in adult pigs it may last for only a few days.

In lungs, the predominant differentiated cells that support PRRS virus replication are pulmonary alveolar macrophages and pulmonary intravascular macrophages. The virus compromises their functions and provokes an inflammatory cell infiltration resulting in interstitial pneumonia which, in conjunction with enlarged lymph nodes, is the common lesion in a PRRS virus infection. Microscopically, lesions can be also observed in the uterus of sows and in the testicles of boars. Clinical disease and lesions due to the PRRS virus infection occur by a variety of mechanisms that include apoptosis of infected and noninfected macrophages, induction of polyclonal B-cell activation and induction of inflammatory cytokines.

Among other causes, the severity of clinical signs strongly depends on the infecting strain, the presence of concurrent infections, the host’s immune status, and the age of the pig.

In viraemic pregnant sows, it is known that PRRS virus can infect foetuses, reaching high titers in them. The virus crosses the placental barrier most efficiently in late gestation (after day 70, approximately). Recent studies have indicated that the endometrium and the placenta are involved in the PRRS virus passage from sow to foetus and that foetal death is caused by virus replication in the endometrial and placental tissues. As a result, PRRS virus can cause abortion or affect the viability of a variable percentage of the foetuses.

The earliest evidence of PRRS virus comes from retrospective serological studies; antibodies have been detected in serum as early as 1979 (Canada). In the U.S., retrospective analysis found no evidence of infection until 1985. Its prevalence then increased rapidly in North-America until 1988-89, when clinical outbreaks were first reported. There was probably a similar pattern in Europe. In Asia, the first evidence of antibodies has been retrospectively documented in serum from 1985 (South Korea). These results suggest that PRRS virus had probably been circulating in domestic pigs for several years before the first outbreaks were reported. 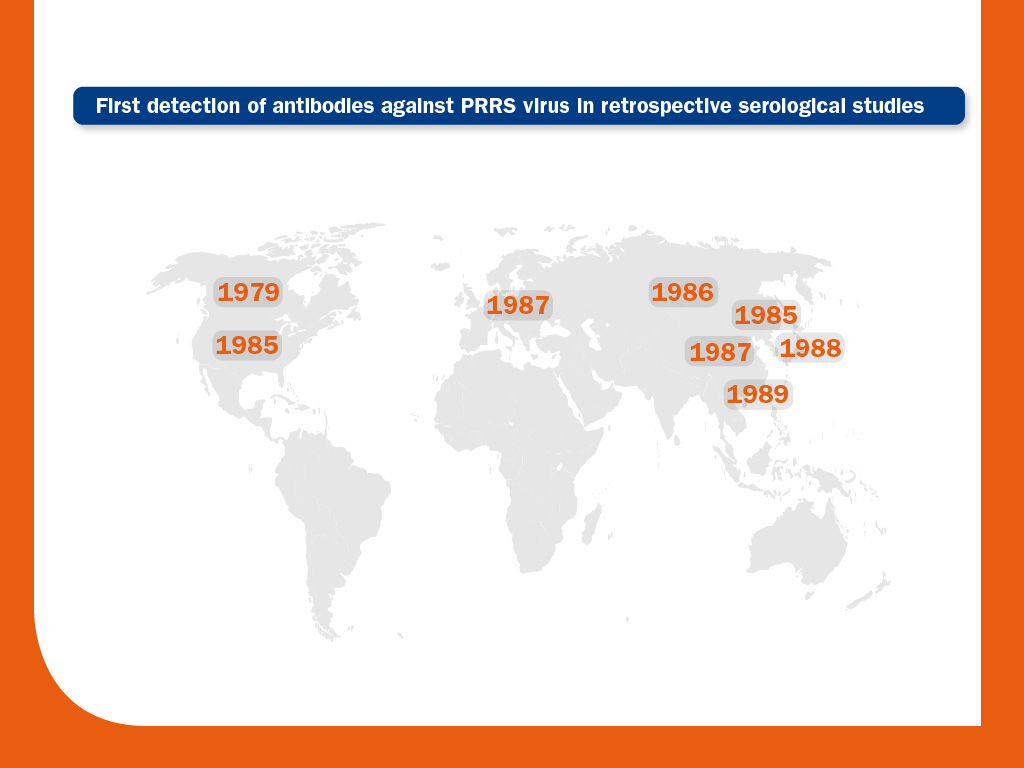 Curiously, we are facing a disease caused by one virus with two different strains (genotypes) that appeared almost simultaneously on two different continents. The explanation behind this phenomenon is unclear. Nevertheless, two main hypotheses for the uncertain origin of the virus have been postulated:

© Laboratorios Hipra, S.A. 2015. All Rights Reserved.
No part of this website or any of its contents may be reproduced, copied, modified or adapted, without the prior written consent of HIPRA.