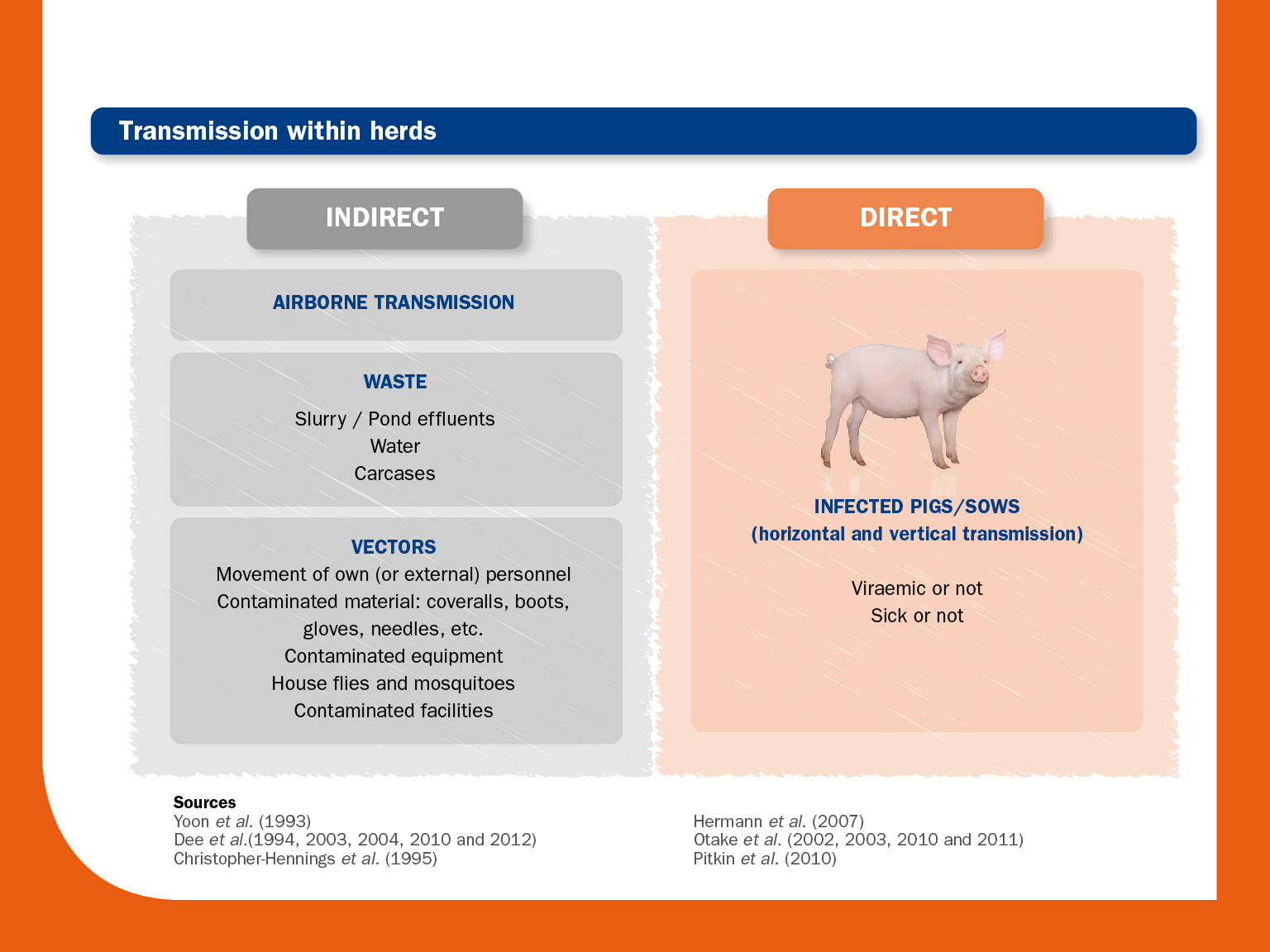 Infected pigs can shed virus from multiple routes and for long time; mainly by saliva and semen; less frequently in milk and colostrum, and rarely and sporadically in nasal secretions, urine and feces.

The amount of virus shed, together with the duration of the shedding, vary significantly among strains. 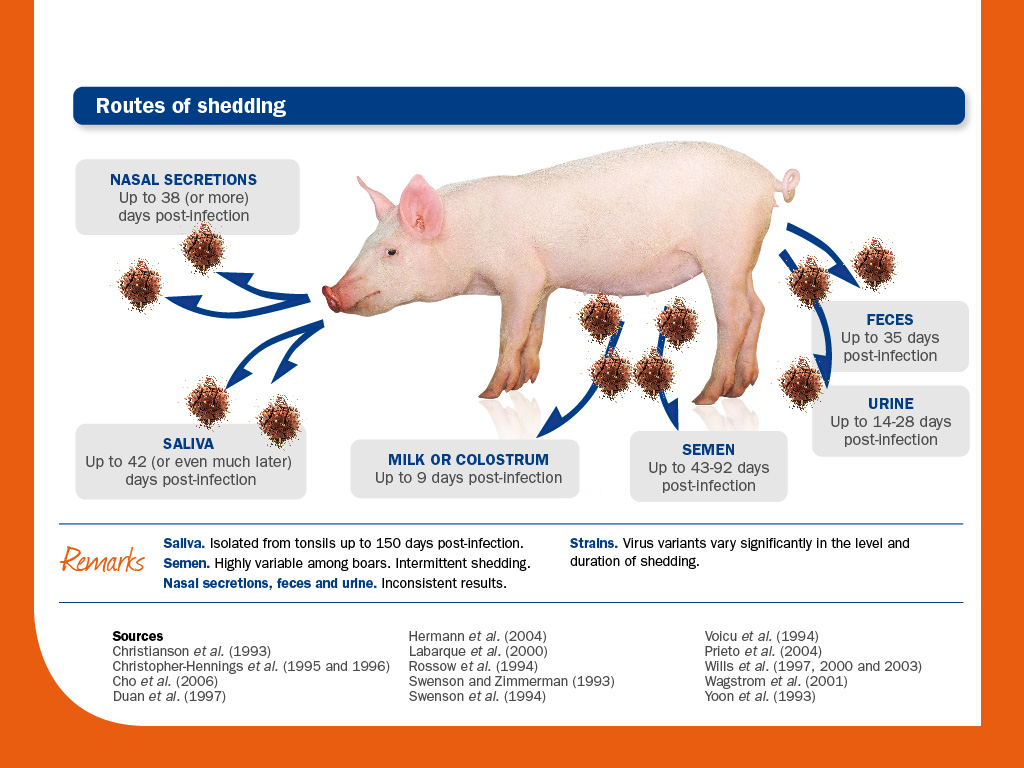 Swine can be infected by several exposure routes , including oral, intranasal, percutaneous, and sexual (intrauterine and vaginal).

The probability of infection is highly dependent on the route and the dose of virus. Also, differences among strains are observed for all transmission routes. 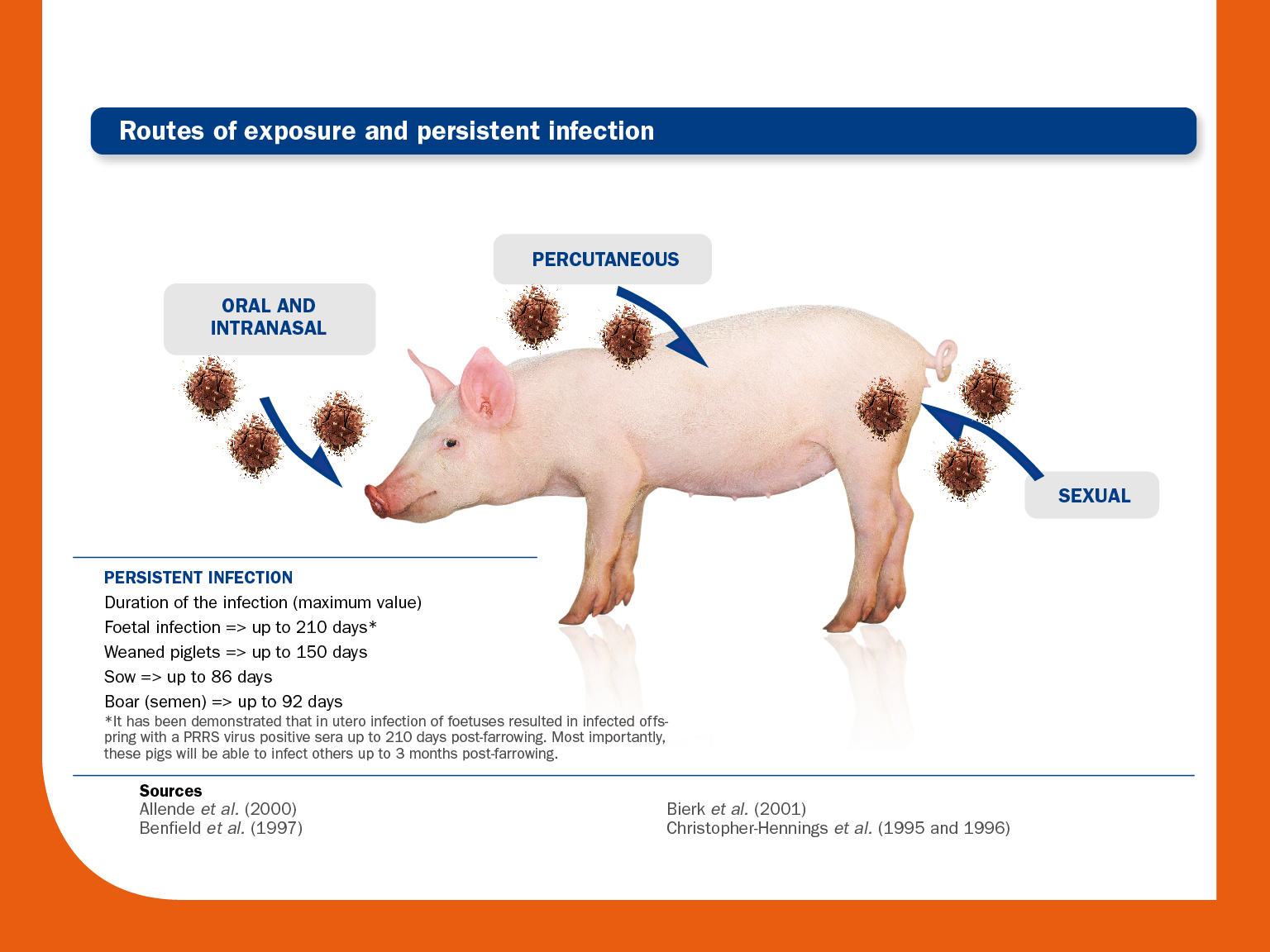 The virus can be detected in blood for long periods of time.

The length of viraemia is strongly influenced by the strain and the animal’s age; it may extend during weeks in piglets (up to 90 days), whereas in adult pigs it may last for only a few days.

After viraemia, PRRS virus can persist for several weeks, particularly in tonsils and other lymphoid tissues.

Although most pigs clear PRRS virus within 90 or 120 days, some may remain persistently infected for several months (virus may be isolated from tonsils up to 150 days post-infection). Persistent infection occurs at all ages, but maximum values have been observed in in utero infected fetuses.

It has been suggested that the persistence of PRRS virus involves continuous viral replication; not being a true steady-state of persistent infection.

Obviously, prolonged viraemia and persistent infection increase the possibility of transmission. As other members of the family Arteriviridae, pigs recovered from viraemia and/or acute phase can shed PRRS virus at low levels or intermittently.

Therefore, a negative result for viraemia or serum antibodies in a previously infected pig does not rule out that the animal could be shedding the virus. 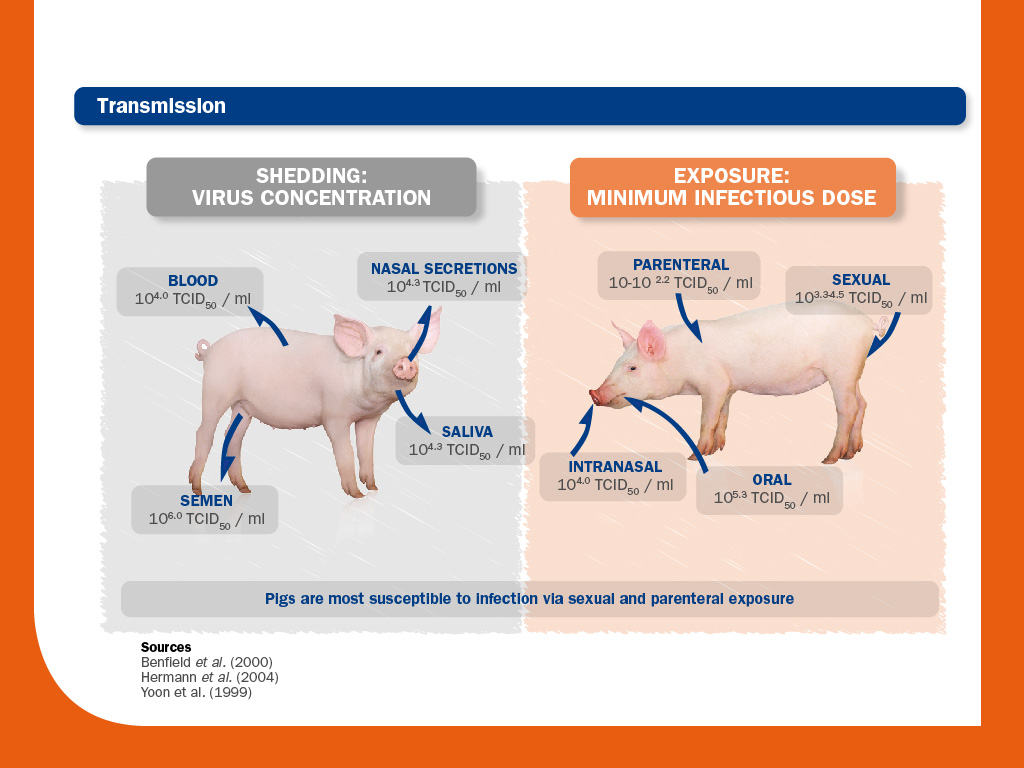 a.4) Importance of semen in PRRS virus transmission:

Semen can play a crucial role in PRRS virus transmission. This is due to the extensive use of artificial insemination and the special features of the virus shed by this route.

Though viraemia usually is very short in boars, from a few days to a maximum of two-to-three weeks, they can shed the virus in semen several weeks after infection.

Moreover, PRRS virus can be isolated from bulbourethral gland of boars up to three months post infection, suggesting that the reproductive tract could play a significant role in the persistence of the virus.

Therefore, viraemia is not an adequate indicator of virus shedding.

Nevertheless, transmission by semen appears more likely to occur at early stages of infection due to the high titres of virus in the semen.

It is also important to note that high variability in virus shedding among boars is observed, and that boars are intermittent shedders.

Consequently, a negative isolated PCR result in serum or semen does not rule out the possibility of shedding by this route; more than one sample from a given boar should be analysed at different time periods.

Pigs are extremely susceptible to infection by parenteral exposure; very few PRRS virus particles are sufficient to infect pigs by this route (10-102.2 TCID50/ml).

Therefore, any event, practice or contaminated material that could affect the integrity of the skin barrier can potentially facilitate the transmission of the virus, such as: teeth clipping, ear notching, tail docking, inoculations with medications (needles) etc…

Infection can occur after the reuse of the needle employed to vaccinate infected pigs. In addition, because the virus is consistently present in oral fluids, normal pig social behaviour and aggressive interactions (bites, scrapes, abrasions…) can also result in parenteral infection. 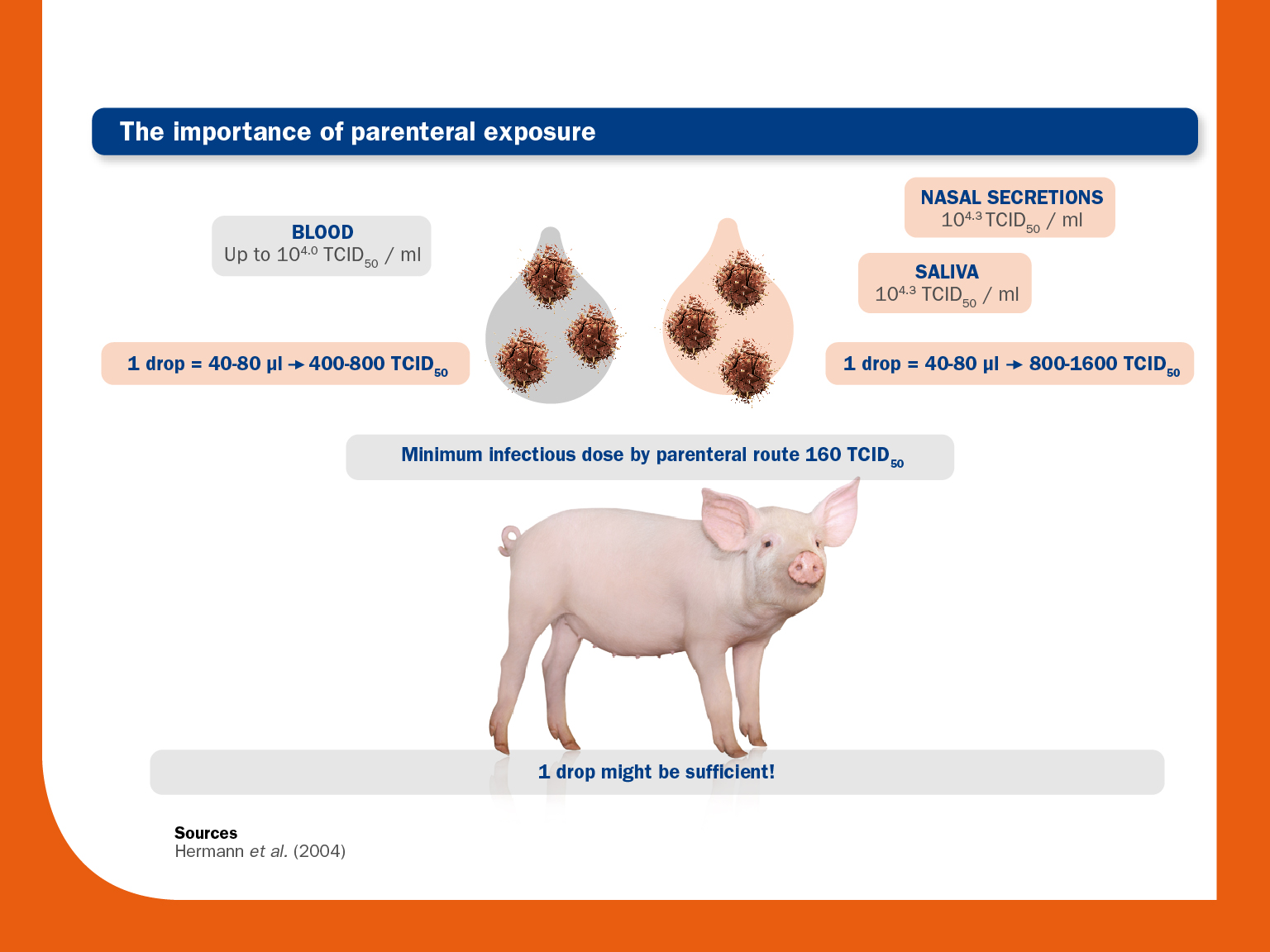 Regarding vertical transmission, the virus can efficiently cross the placental barrier in the last period of pregnancy. As a result, fetal death can occur; alternatively, piglets that survive pregnancy are usually weak, and remain infected.

As we have stated before, piglets infected during the fetal phase could remain positive for a long time and infect other piglets as late as three months post-farrowing, contributing to the spread of the infection. 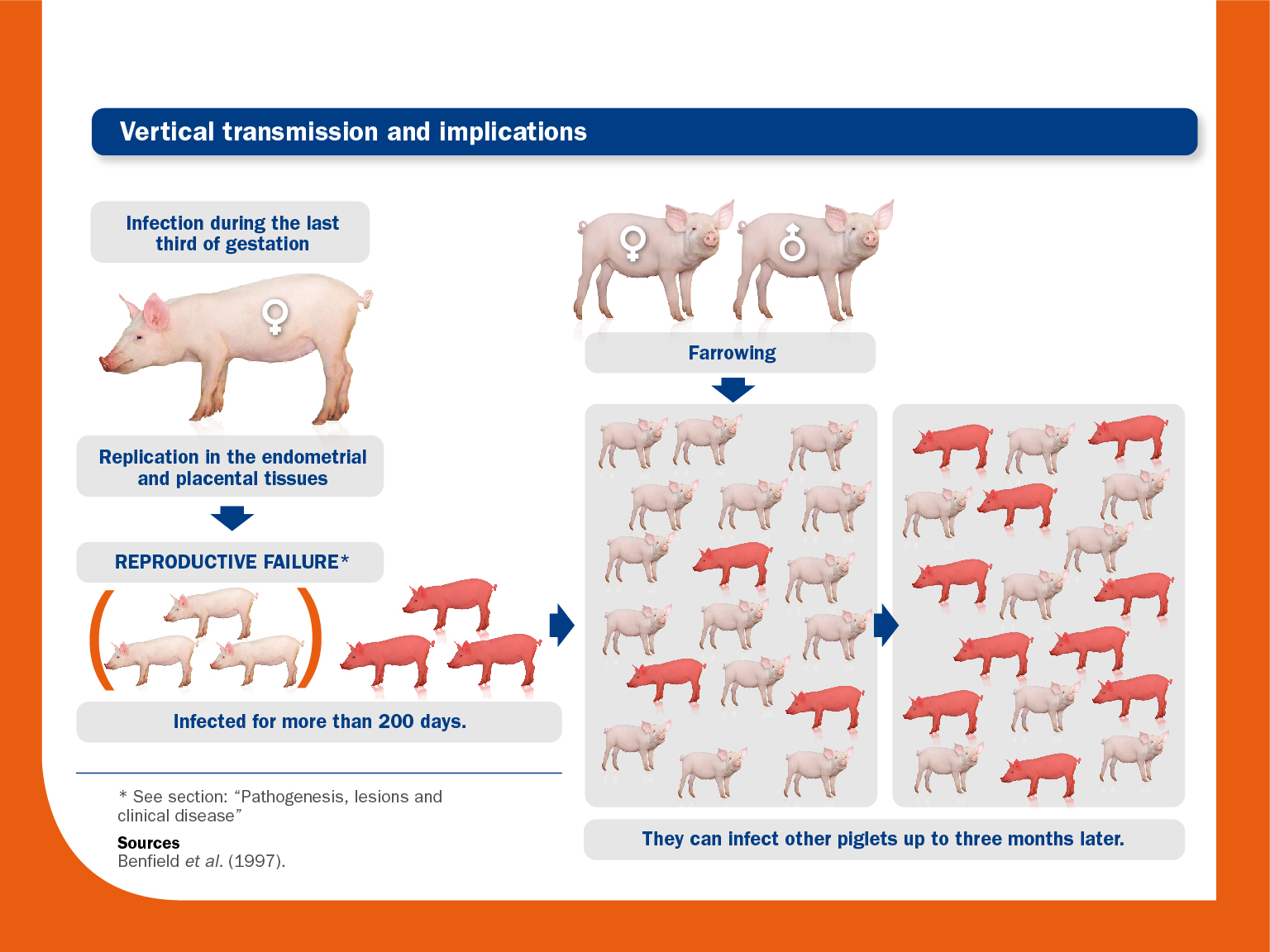 Several routes of indirect transmission by fomites and contaminated residues, as well as airborne transmission, have been demonstrated (please see the point “Transmission between herds”.

Within the herd, we should pay particular attention to hands/gloves, coveralls, boots, and mainly to needles, since pigs are most susceptible to infection via parenteral exposure.

cookielawinfo-checkbox-necessary
Domain: undefined
Description: This cookie is set by GDPR Cookie Consent plugin. The cookies is used to store the user consent for the cookies in the category "Necessary".
Duration: 1 year 1 day 1 hour
Type: Necessary

cookielawinfo-checkbox-necessary
Domain: .prrscontrol.com
Description: This cookie is set by GDPR Cookie Consent plugin. The cookies is used to store the user consent for the cookies in the category "Necessary".
Duration: 1 year 19 days 15 hours 19 minutes
Type: Necessary

cookielawinfo-checkbox-non-necessary
Domain: .prrscontrol.com
Description: This cookie is set by GDPR Cookie Consent plugin. The cookies is used to store the user consent for the cookies in the category ''Non-necessary''.
Duration: 1 year 19 days 15 hours 19 minutes
Type: Necessary