To better understand the development of immunity against PRRS virus, it is first necessary to have an idea of how the immune system works.

From an academic point of view, the immune response is generally divided into innate and adaptive immunity, although it must be considered as a continuous process where close interactions exist.

In short, the key differences between innate and adaptive immunity are in terms of time, specificity and memory.

Innate immunity occurs immediately as a first response to infection. In this phase, cells are activated by conserved molecular patterns associated with pathogens.

In this stage, cells are able to respond to specific antigens; to this end, the processing and presentation of the antigens are essential.

In adaptive immunity, subpopulations of B and T cells can survive as memory cells.

After re-exposure to the same antigen, these specific-antigen memory cells can rapidly mobilise. As a result, the adaptive immunity will respond rapidly and effectively to pathogens that have been encountered previously.

The following figure summarises the actors and components that participate in innate and adaptive immunity. Innate immunity includes important processes such as inflammation and antigen presentation.

As can be observed, antigen processing and presentation is essential to correct development of adaptive immunity: 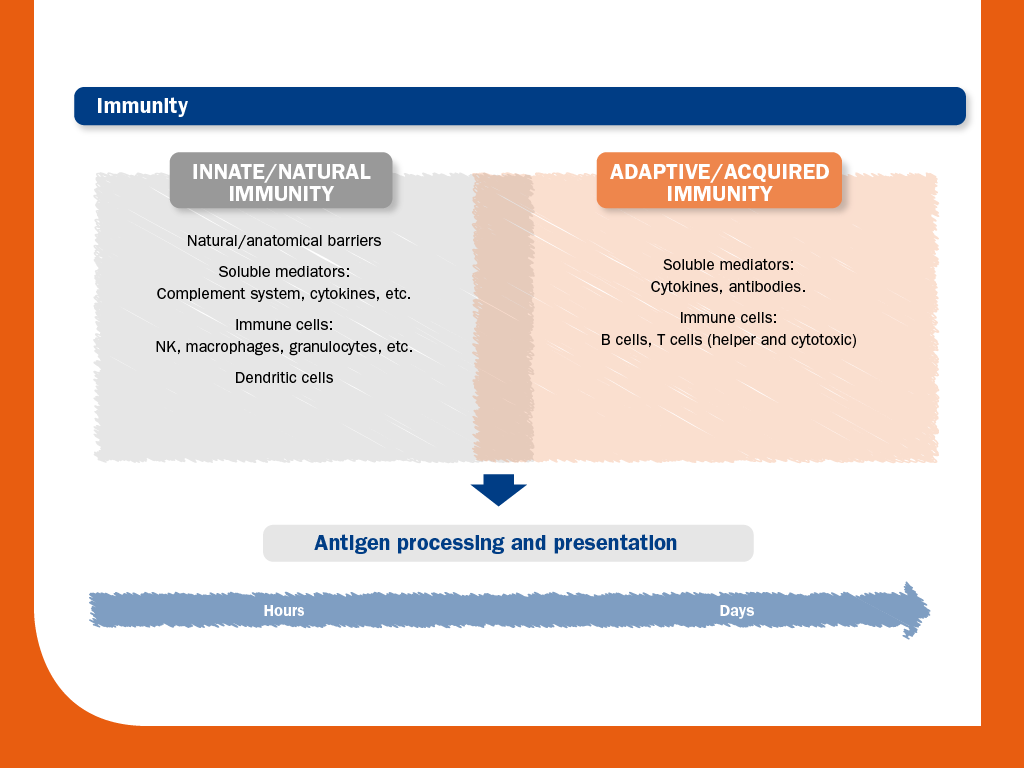 As we have seen, innate immunity recognises and responds to pathogens in a generic way and it does not confer long-lasting immunity. Thus, its main feature is the ability to respond quickly and broadly against infections and other problems/alterations.

Although it might seem that innate immunity is just a coarse first line of defense against infections, it is essential for the development of adaptive immunity.

In fact, innate signals drive the activation and polarisation of the four major T helper (Th) subtypes, which are key elements in adaptive immune responses. As Ths are unable to recognise antigens by themselves, antigen processing and presentation by antigen-presenting cells (APCs) is required. APCs include dendritic cells (DCs), macrophages and B cells; however, DCs are considered the professional APC for the priming of naïve T cells.

Thus, it can be said say that DCs are a bridge that connects innate and adaptive immunity. 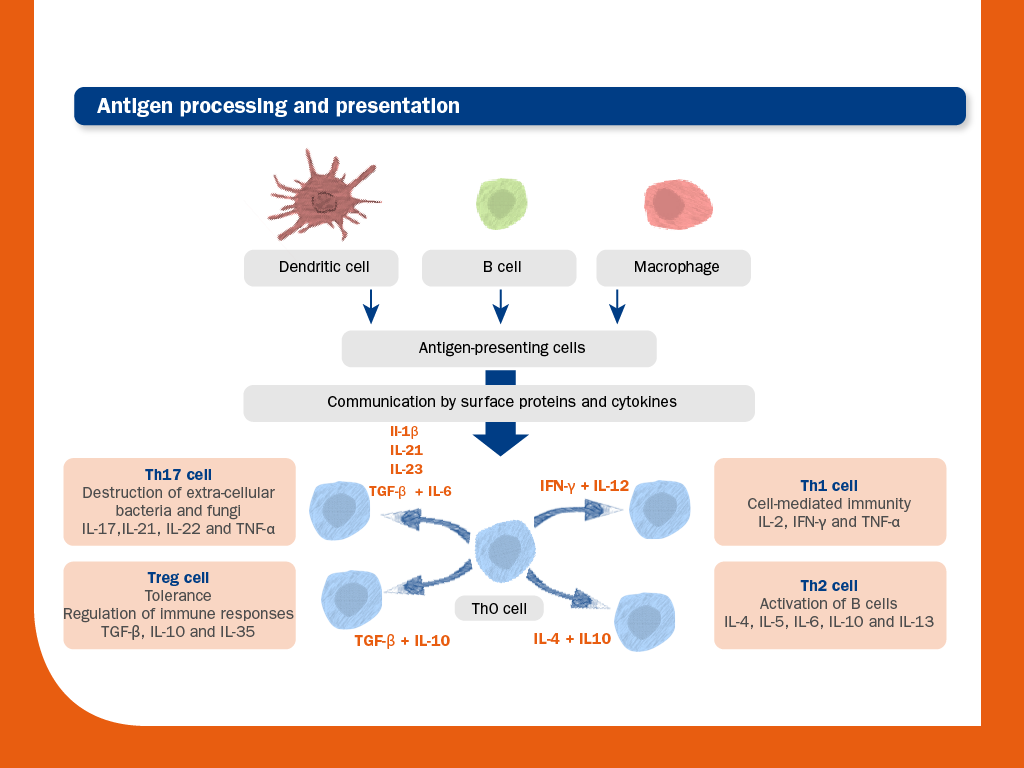 As we have seen, APCs interact with Th and induce their polarisation to the four major T helper (Th) subtypes: Th1, Th2, Th17 and Treg cells.

The image below shows an overview of the adaptive immune response (Th polarisation towards Th1 or Th2) after virus recognition by APCs.

Antigen-presenting cells (APCs) process and present the antigen to the T cell Th0. Signals from the APCs before and during the antigen presentation drive differentiation and expansion of Th cell subtypes.

Th1 polarisation produces IL-2, IFN-γ and TNF-α. This results in activation and differentiation of the cytotoxic lymphocytes, which directly kill virus-infected cells.

Activated Th2 cells produce B cell-stimulating cytokines that promote B cell differentiation into B plasma cells, which produce large amounts of antibodies. 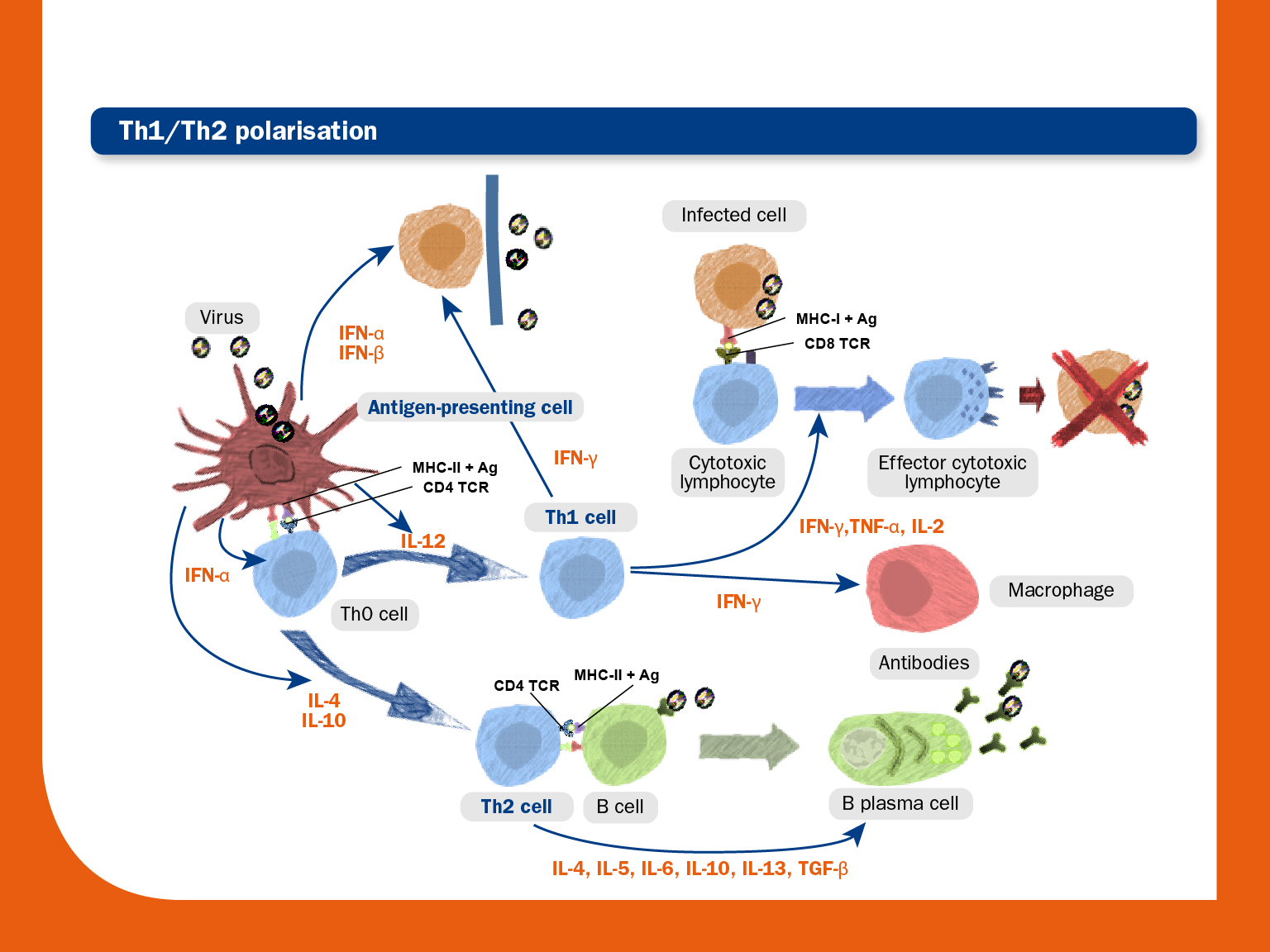